How is your law firm perceived by the public?

An independent marketing survey found that public perception of our legal television advertising was as follows:
Our lawyer commercials created the highest levels of top of the mind awareness. This awareness was well distributed among numerous & various demographics.
Among competing lawyers, our advertising received the highest percentage of positive impression in the marketplace and the lowest percentage of negative impression.
Our advertising did a good job of communicating messages with the highest recall for services advertised - personal injury / wrongful death and medical malpractice.
Our commercials created highly identifiable law firm spokespersons. A high percentage of those surveyed mentioned the lawyers appearing in our ads by name.
These results reflect the exact goals that I set out to achieve when creating advertising and marketing strategies for law firms. Establishing a strong brand and presence is the key to long term continued success. Advertising toward those who may need legal help in the future is just as important as reaching those who seek legal services today.
Posted by Unknown at 11:31 AM No comments:

Spot placement is the most critical part of a legal advertiser’s television advertising strategy. The goal is to reach the most viewers with as much frequency as possible for the least amount of money. Time of day, type of programming either on local stations or cable networks via local insertion, as well as viewer demographics, are all part of the mix. Many lawyers and legal marketers continue to implement their TV advertising from a direct response approach, i.e., when the TV spot airs, the potential client will respond with a call. Okay sure, you want to reach the recently injured, but for real success you need strategies that will create name recognition and top of the mind awareness among all future injury victims as well. If the majority of your television spots are being aired during daytime hours only and/or your not aggressively advertising on cable television, it’s time to reconsider your television advertising strategy. To learn more about how you can improve the efficiency and effectiveness of your media placement, please contact us.
Posted by Unknown at 11:29 AM No comments:

Your television commercials should enhance you image, not drag it down. Even if you believe you have a good commercial, you might want to do a search on Google, YouTube and the like. It’s astonishing to me that a law firm will continue to air a TV spot that has been labeled on YouTube as a “stupid video”. Frankly, with well planned media placement, a simple static screen with the law firm’s name and number could be a marketing success. But since you have the audiences’ attention, it makes sense to promote and inform about the law, you, your reputation and your services. There are many variables to consider when producing law firm commercials and not enough space to address them all here. I do however want to address one of my pet peeves. I’ve been producing films and videos for 25 years and I do not like the use of teleprompters. Unless you are a seasoned professional, and even some of them are not so good, you will inevitably appear to be reading and your eyes will be shifting annoyingly back and forth. Lawyers are a highly educated bunch and many, especially trial lawyers, possess excellent verbal skills. With just a minimal amount of effort and proper direction, most lawyers should be able to deliver a 30 or 60 second commercial message without the need for a teleprompter.
Posted by Unknown at 11:27 AM No comments: 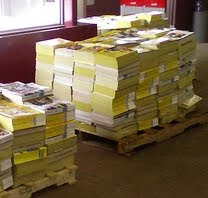 I have frequently written about the ineffectiveness of yellow pages advertising for lawyers. The medium is nearing extinction, it’s much too expensive, its contractual obligations are stifling, and the return on investment is extremely poor. An internet search on the subject will reveal many other advertisers who would concur. But here is one more reason not to advertise in the yellow pages – the environment. Every year in the US, over 500 million phone books are published. That’s far more books than there are people! The waste of resources is staggering, and the number of books recycled is far less than the number of books that end up in landfills. 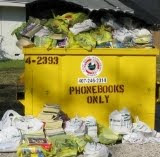 A big selling point for yellow pages salespeople is the number of books published and distributed. But just how many of those directories containing your big full page ad are actually opened and viewed by another human being?
Posted by Unknown at 11:20 AM 1 comment:

With yellow page advertising, your message sits somewhere in a desk drawer waiting for the masses to find your ad. Similarly, your website is just sitting somewhere in cyberspace waiting to be found on crowded search engines. Advertising that sits and waits to be discovered is not cost effective and it does little to increase your law firm’s name recognition and top of the mind awareness. At Legal Marketing Results, we strive to create television commercials that enhance the law profession's image. We create our commercials with high quality, professional production tools such as 35mm and Super16mm film cameras. Plus, because we have our own film/video company, Lasso Productions, we eliminate the middle man and pass the savings on to you.

There has never been a better time for lawyers to advertise on television.

Local television stations and cable providers have been hit hard by the economy and they’re desperate for advertising business. The loss of revenue from a year ago is astounding. TV ad sales for 21 of the top 25 local broadcast categories were down 25% on average in 3rd quarter 2009 versus 3rd quarter2008. Not surprising however, ad revenues from legal services for that same period were up over 3%. The available inventory for commercial airtime on local TV stations and cable is enormous and great spot placements are there for the taking. At Legal Marketing Results, we’ve developed strategies that enhance the perception of frequency and increase the effectiveness of your advertising.
Posted by Unknown at 11:15 AM No comments:

Attention: Medical Malpractice Plaintiffs’ Lawyers – here’s what your competitors have been up to!

According to the Chamber Institute for Legal Reform, television advertisements soliciting plaintiffs for medical malpractice lawsuits increased from about 10,150 ads in 2004 to more than 156,000 ads in 2008--nearly a 1,400 percent increase in four years, according to a new study released today. The study showed that spending for these ads increased from $3.8 million to nearly $62 million during this time period--a 1,300 percent increase in 2008-adjusted dollars. In addition, while TV ad sales drastically declined in nearly all of the top 25 local broadcast categories in 2009, revenues for legal services actually increased. Clearly, television is a very important advertising medium for law firms that want to be competitive.

Just who and where are those potential medical malpractice clients?

Numerous research studies have shown that medical errors disproportionately affect minorities, the poor, the less educated, the elderly and those who live in rural areas. I’m quite sure that most plaintiffs’ lawyers who represent medical malpractice victims would agree. So how do you reach these potential clients? Well, if you’re marketing your law firm solely via the internet, the odds of these individuals seeing your website or search engine ads are greatly diminished. Why? Because numerous surveys have shown that the above mentioned demographic groups are among the least likely to use and/or have access to the internet. Television is a far superior advertising medium for law firms who want to reach current and future victims of medical malpractice.
Posted by Unknown at 11:10 AM No comments:

Fact: A law firm cannot build a strong brand with community wide, name recognition and top of the mind awareness without traditional media such as television.

In recent years, internet “marketers”, including every “kid” with a computer, have convinced many lawyers that all they require for success is a fancy website and some search engine optimization. Many have proclaimed that “television is dead”. This is an absurd, ignorant statement and any new media marketer who tells you this is either inexperienced or just plain full of it! If you want your law firm to become a well known brand name, you’ll need to utilize media with plenty of frequency and reach. And television advertising delivers both better than anything else out there.
Posted by Unknown at 11:07 AM No comments: